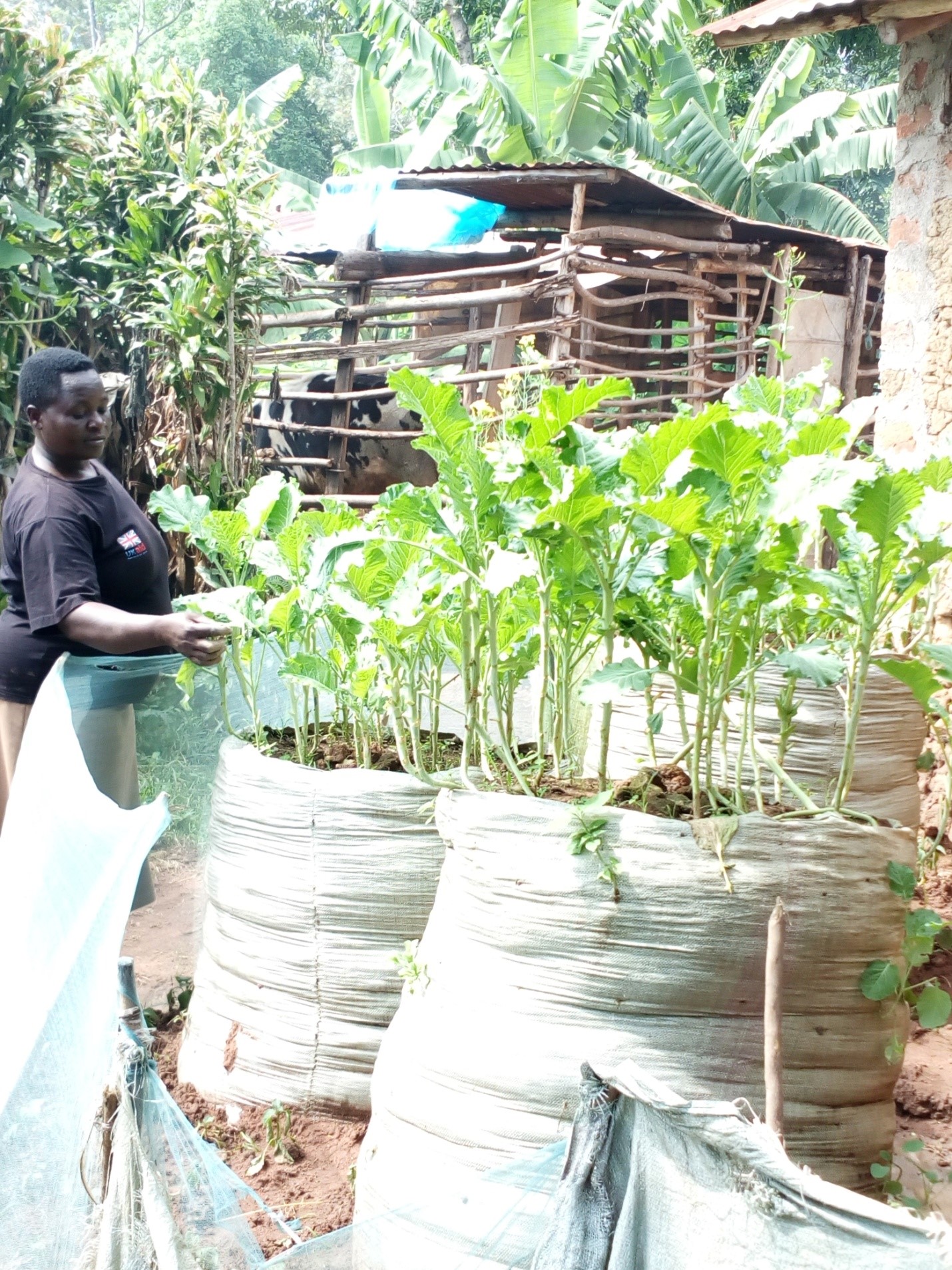 Violet Natembeya is a small-holder farmer with 4.5 acres of land. She has a family of 6 people, her husband and 4 children. She grows bananas, cassava, beans, maize, groundnuts and vegetables. Violet is a member of Upendo Women Group an affiliate group of Kimaeti Farmers CBO. She joined her group in 2011. Upendo Women Group is one of the groups participating in the Kenya Agriculture Carbon Project (KACP). Before she joined the group, her main challenges were soil erosion, unpredictable weather patterns and unreliable market for her bananas. She got poor harvests from her farm, resulting to little food which was not having enough for her family. 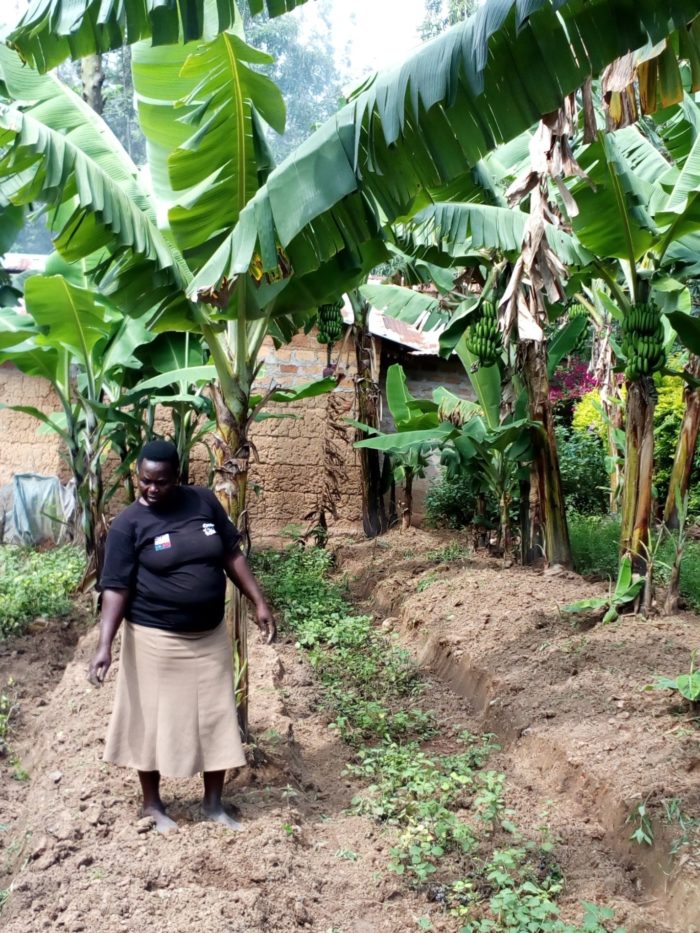 Through the Kenya Agriculture Carbon Project (KACP), Violet has not only benefited directly with the carbon revenue but also through increased tree cover on her agricultural land. She has so far planted over 3,200 long term trees since 2011, she has seen an increase in her harvests, and started saving within her group using the Village Saving and Loaning (VSA) model. Upendo Women group have an annual accumulated saving of Ksh. 145,250 which is then loaned to the group members.

Violet has also embraced the integration of various SALM practices which include; nutrient management, agroforestry, using renewable energy, Soil and water conservation, and sustainable agronomic practices in various crop enterprises. She now has an irrigation kit that has enabled her to continue farming even during the dry season. This helps her to cope better with the unpredictable weather changes and contribute to her realizing better incomes as a result of being able to diversify her farm enterprises such as growing bananas, vegetables, and dairy farming.

Her group which has 22 members is among the groups that benefited from the carbon revenues. The group decided to invest the carbon revenue together instead of sharing it out among members. Their dream is to own goats and they have currently put the carbon revenue to fund their loaning activities within their Village Savings and Loaning scheme. They continue working hard and are hopeful that by adopting sustainable farming practises they will improve their lives as well as receive more carbon revenues.

Violet’s an annual cash income from her farm is about Ksh. 60,000. She has increased her food production for the family use. She mostly uses the cash earned from her farming activities to pay school fees for her children and meeting basic household needs. She has recently acquired half an acre of land which is a big deal in a community where land ownership and the purchase is not very common among women. By participating in the Village Saving and Loaning in her group, she has been able to mobilise financial resources to expand farm enterprises on her farm. 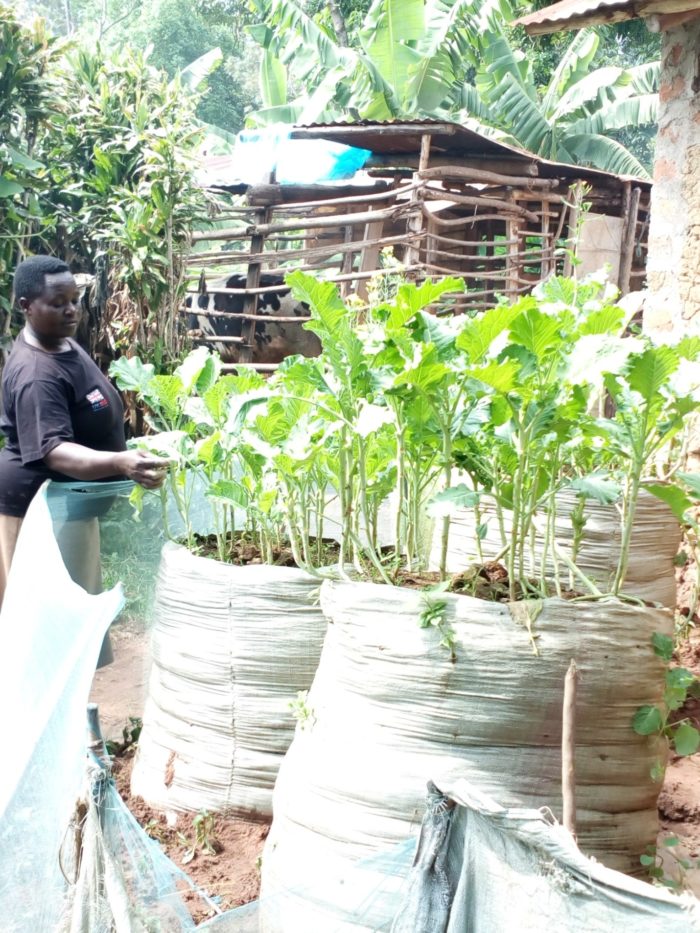