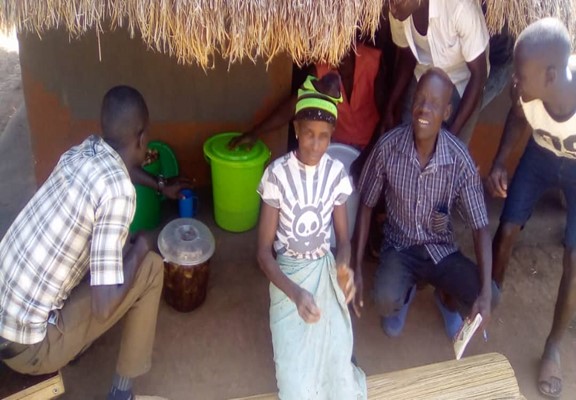 Unffe
In 2020, Ugandan youth from the Eceko village in the Arua district decided to form the Ombacaku youth group. They engage with Vi Agroforestry through the project Green Livelihoods for Youth, and have big plans for their beekeeping business.

The Ombacaku youth group is one of the participating youth groups under the Green Livelihoods for Youth project. The members are from the Eceko village, Eceko parish of the Arivu sub-county in the Arua district. The youth group was established in 2020, branching out from the Ombacaku farmers’ group formed in 2018 by both adults and youth.

Initially, the group engaged in social support such as savings for basic needs like soap, salt and Christmas meat. They were not well structured and relied majorly on the founding members for key decisions in the group.  But with the introduction of the Green Livelihood Youth project in Arua in 2020, the youth, led by Ariju Richard, took a decision to form a separate group for youth only, and the Ombacaku youth group saw daylight.

The Ombacaku youth group was mobilised and recruited into the project by Aseru Stella, a Field Officer attached to their area. Group members enthusiastically attending a range of trainings on everything from organizational planning and development to apiculture and financial literacy. Today the group has embraced management principles whereby all the 26 members have subscribed through payment of membership fees and have subsequently elected a functional group leadership with a functional governing constitution. They are now registered with the Arua District Farmers’ Associathion and the Arivu sub-county.

The group recently reviewed their savings goal to embrace savings for investment. As a result, they have diversified into crop and livestock farming for food and income security. Through their own savings, they have been able to establish a group apiary of 4 traditional beehives and additional 10 modern hives received from the GLY project. Their first harvest in the second week of January 2022 generated almost 60 kg of unprocessed honey which on sale raised UGX 286,000, equivalent to USD 80. The second harvest took place late January and yielded 68 kg of honey.

The group now plans to process the honey and bee wax, anticipating to generate UGX 400,000 equivalent to USD 115 from processed honey and UGX 300,000 equivalent of USD 85 from bee wax. With the income generated from beekeeping, the group plans to buy more hives and fulfil their long-term goal of becoming a leading commercial-based youth group in the sub-county.