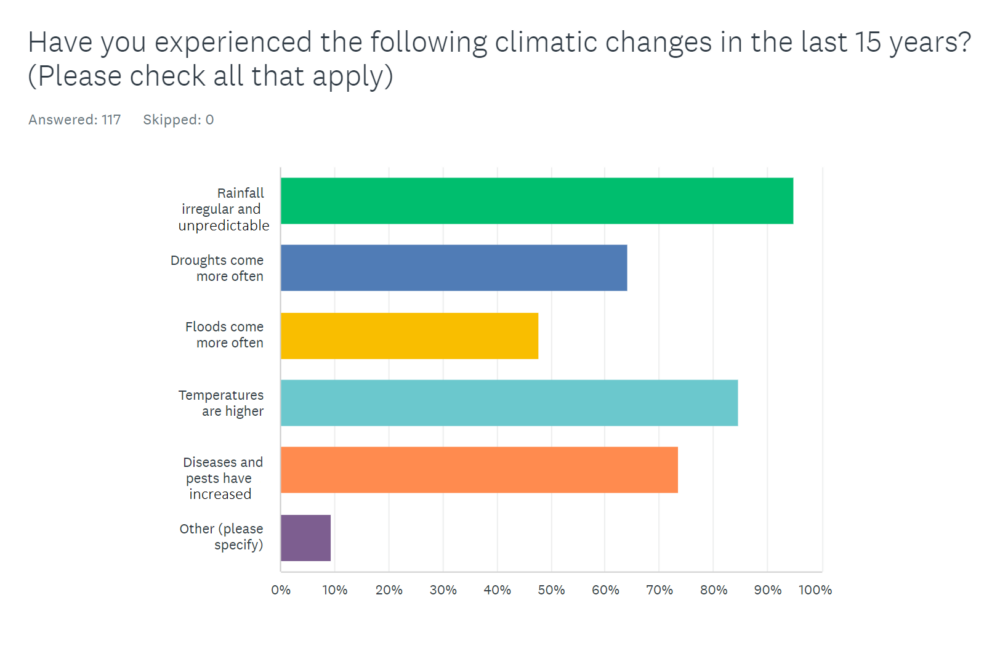 Young Kenyan farmers were asked "Have you experienced the following climatic changes in the last 15 years?" The response "Other" included windy seasons are increasing and destroying crops, water has dried up, soils are infertile even after rains, increase in bush fires, lack of food and malnutrition.

Vi Agroforestry and We Effect have reached out to more than 100 youth in Kenya engaged in farming, to learn and understand their perspective on climate change ahead of the UN high-level climate meeting Stockholm +50 in early June.

Imagine sitting under a mango tree, gazing at the blue skies, sounds of chirping birds, soothing sounds of a gentle stream – the beauty of nature in all its glory. If only this was all that mattered in life. Everything would be so beautiful. Unfortunately, the reality is a different story. While nature has so much to offer to enrich the quality of life for human beings, animals, and improve entire landscapes, so much more comes in to interfere with this. One of this glaring reality is climate change and the impact it continues to cause to populations in developing countries.

As if that was not enough, we are just dusting off ourselves from the socioeconomic ripple effects of impacts caused by Covid-19. Job losses, higher costs of living, unequal capacity to cope due to unequal access to resources and so much more continue to affect many people’s way of life. Still, not enough, the Ukraine-Russia situation – a war taking place far away – is directly affecting the populations in East Africa with such immediate consequences at household level, such as rising costs of cooking oil, more expensive fuel, wheat shortage, and more. This is further pushing the cost of living through the roof.

Decision-makers must act on what youth have to say

One group of people that has for sure been hugely impacted is the youth in East Africa. They are rarely at the decision-making table, but they are expected to find ways to cope with the consequences of decisions made for them. The participation of young women is even more restricted by social norms and other barriers that limit their engagement in decision-making.

As we near the Stockholm +50 global international meeting convened by the United Nations General Assembly to be held in Stockholm, Sweden on 2nd-3rd June 2022, it is important that decision-makers listen and act on what the youth have to say about climate change. Vi Agroforestry and We Effect reached out to more than 100 youth in Kenya engaged in farming, to learn and understand their perspective. The reach was through farmer organisations that partner with the organisations in Kenya.

The youth spelled out that they have experienced irregular and unpredictable rainfall patterns, prolonged and more frequent droughts, more intense flooding, higher temperatures, conflict over pasture and water for animals, farms, and people, among others happening in their communities.

“Intense drought have affected my village by destroying the environment we live in, changing people’s livelihoods, harming animals resulted by lack of water and pasture for the animals. Climate change has also pushed people in my village to poverty.”

All these and more have severe impact on the youth and their communities. Flooding for example has caused destruction of houses and rendered the roads impassable. This has in turn affected access to markets, schools, places of work, etc., limiting people’s possibility to continue with their day-to-day activities. This directly affects their ability to be productive and engage in economic activities that would contribute to improving their quality of life.

Unreliable weather patterns have in many instances meant reduced food production. Families that would otherwise have been self-sufficient with food from their farms and surplus to sell for income, do instead need to buy food. For people with no alternate source of income, this directly affects their food and nutrition situation, easily leading to malnutrition – especially for the young children and women of reproductive age who have special dietary requirements in their households. For the youth, specifically youth who are self-employed in the agriculture value chain, it means loss of income. This is affecting every other sphere of their lives.

The situation increases poverty by pushing farms and farmers into loss-making ventures.  The ripple effect is much greater, e.g., if the youth offer farm produce transport services in their community, when there is no harvest, then they are also out of business.  This means loss of jobs or livelihood opportunities for youth who would otherwise be employed in the farms or earning from their farms and services linked to farming. They are forced to look for alternative sources of earning which are not easy to come by. Youth involved in sales and marketing jobs, or other activities that require them to be outdoor find it difficult to work in the extreme weather situations that are now more frequent.

In a country like Kenya where the cost of living is on the rise, more and more youth are pushed further into poverty. Not enough is being done to enable them to cope with this situation. At the same time, they constitute the biggest percentage of the population in Kenya. According to the last population census in Kenya, 75% of the entire population is under 35 years of age.

“It has completely changed the way of farming.”

“I can’t tell when am supposed to do my farming as I used to.”

Youth have much to contribute – if engaged

The youth engaged in this study expressed that they have a lot to contribute. A place on the decision-making table would be a starting point for them to engage with the decision-makers for their issues to be addressed. The youth participate in agroforestry work within their communities, though not without challenges. For example, youths do not have rights to tree investment and to land where they can successfully implement agroforestry.

The youths we reached out to through farmer organisations in Kenya have been or are part of networks and forums that raise awareness about climate change. Although they are getting more knowledge from these platforms, some of them do not feel confident enough to participate in the forums. To increase youth participation, they felt there is need to specifically target the youth, inspire them, and enable them to access the internet and relevant material. Youth furthermore need access to meeting places where they can have space to freely engage, and support to gain greater say in political forums.

“I’m a youth who believes in green for survival, vegetation is my food and my wealth generator. When we experience climate change like in Kenya last year it was hot, and plants could not survive what affected me so much and the same trend has just started this year.”