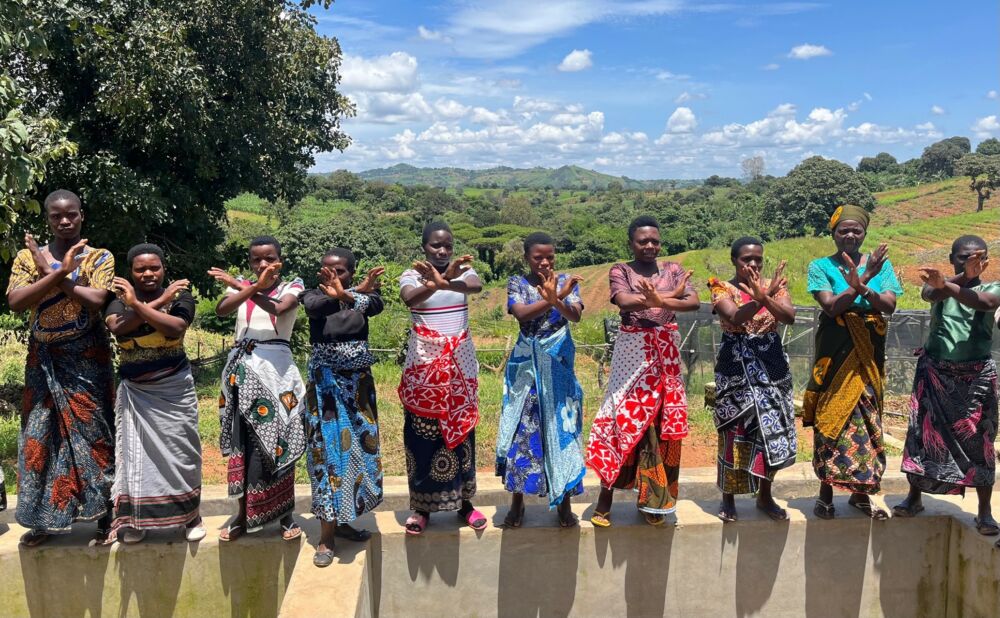 During this year's Women's day, we visited CODEP in Mbeya and it was amazing to see how women used what they learned from the project to build a more sustainable future for themselves. Below we take a look at their struggles and milestones as we recognise their efforts.

Meet Justa Yisega , who is part of Shinzingo AMCOS (Agricultural and Marketing Cooperative Society) in Mbeya Rural in the Mbeya region. Justa has her own piece of land where she grows coffee and other crops.

Before joining the AMCOS she and her fellow farmers used to process their coffee harvest at home with a manual hand pump machine, to remove the outer shell of the coffee bean. This is a physically intense job that often falls upon women in the household. Theft of coffee was also a problem, often stolen while it was left to dry after processing, and the farmers continued to collect the harvest. Things have changed for these female farmers. Through CODE-P, the AMCOS has rehabilitated their Coffee Processing Unit (CPU), and with saving and record keeping training from the project, the society has bought a new machine capable of processing 2.5 tonnes of coffee an hour. The CPU significantly reduces the time spent on laborious post harvesting processing. This has allowed women to focus on other income generating activities during the harvesting season.

Justa is now earning more money from her coffee than ever before, last season she took 7000 TZS (equivalent to 3 USD) per kilo, due to its increased quality and reduced post-harvest loss. Other farmers in the region only just joining the project report last season earnings as low as 4000 TZS (equivalent to 1.72 USD) per kilo for comparison. There is no more theft as coffee is now dried at the AMCOS. Improved drying stands have been provided by the project which are increasing the quality and subsequent price of the coffee as it is no longer dried on the ground.

Village and Savings Associations (VSLAs) are being formed at all the AMCOS’s following training from CODE-P. When a farmer joins a VSLA they are committing to contribute a small amount of money every week to purchase group shares, later they receive back a lump sum of their savings to then invest in their farm, family, or other activities. Loans are also issued from the VSLAs, with interest rates much lower than other loaning institutions, in case of emergency.

These VSLAs are especially favoured by women who struggle to save money in the household because of social and cultural reasons. Rehema Ndunguru from Sepukila AMCOS in Mbinga District, Ruvuma Region has been able to harness her entrepreneurial skills with the money saved through VSLAs and the increased money she is receiving from her coffee harvest. She has since started many businesses, using her savings to buy cattle, a sewing machine and even to start her own shop in her village to sell children’s items.

Juliana Shandu from Igale AMCOS in Mbozi District, Songwe Region is new to the project. Juliana is a lead farmer, a role assigned to disseminate the learnings she receives from the project to the farmers in her community. Lead farmers become important and respected voices in the community as they pass on knowledge on sustainable farming techniques to improve the quality and yield of crops. Juliana has been a keen coffee farmer for the last 5 years but has seen her crop yield suffer from fungal diseases such as Coffee Berry Disease (CBD). CBD affects coffee crops all over the Southern Highlands. Juliana is excited by the trainings offered and the establishment of nurseries of climate and disease-resistant coffee seedlings in her community, implemented by CODE-P. She tells us she will pass on the trainings to her two children who she will encourage to coffee farm as a profitable livelihood.

Female smallholder farmers are still up against challenges. Unlike Justa, Rehema and Juliana, most women are still farming on land which they have no rights to and is in their husband’s name. Without land rights these women cannot formally join AMCOS’s and access formal financial services, they also have little decision-making power over the money earnt from the crops on the family farm.

CODE-P has been tackling this issue by training male and female farmers on gender mainstreaming and the benefits for the family if a woman owns her own plot. The training has started to encourage men to gift pieces of land to their wives. It has been shown that a woman is more likely to reinvest the money they make back into the household, improving the family situation.

The Smallholder Coffee Development Project, also known as CODE-P, is a project under the AGRICONNECT programme, which is funded by the EU and Sida for four years covering 2020 to 2024.

CODE-P is implemented in the Southern Highlands of Tanzania covering the regions of Mbeya, Songwe, and Ruvuma. The project aims to contribute to inclusive and sustainable development of the coffee value chain for improved incomes and nutritional status of smallholder farmers, with a specific target of reaching women and youth farmers.