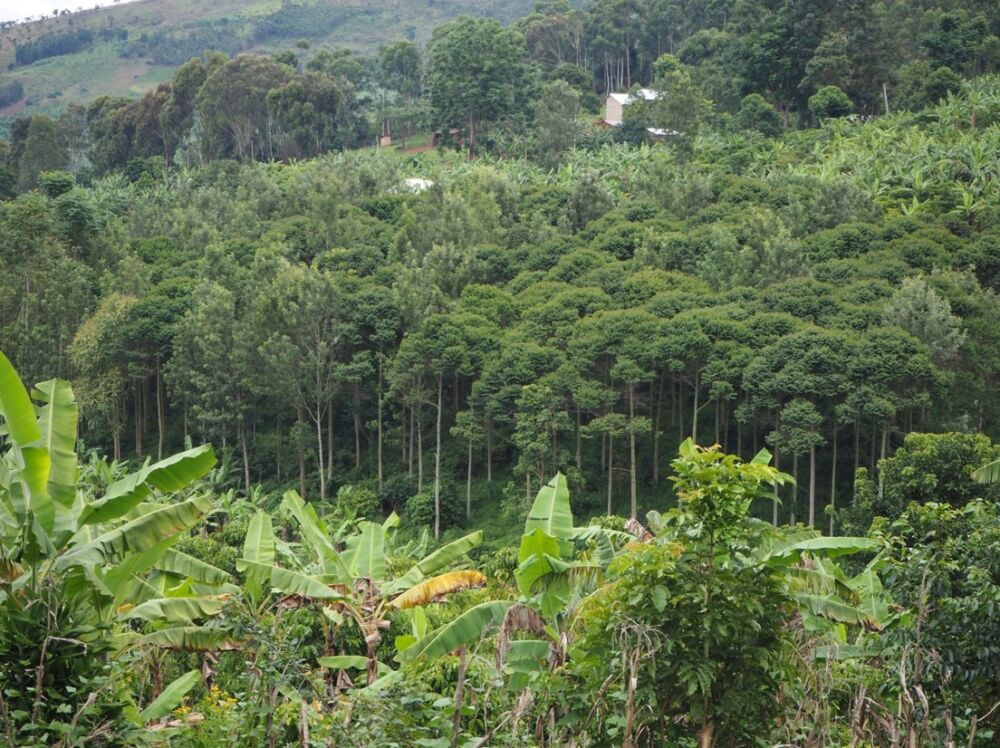 Vi Agroforestry’s Emiti Nibwo Bulora (ENB) Project in Tanzania has reached its 13th year of operation in 2021 and will see 620 smallholder farmers graduate from their 10-year contracts. To celebrate this graduation a team of Vi communication staff travelled to 20 project sites in Kagera region in April 2021 to document the achievements of these farmers over the last 10 years. The following case study records the stories heard from these farmers and documents the handover of the project to our new implementing partner Smart Farmers Transformation (SFT).

Emiti Nibwo Bulora translates as Trees Sustain Life from the tribal language of Nyambo/Haya spoken in the project region. From inception the goal of this project was to incentivize smallholder farmers to practice agroforestry techniques by rewarding tree planting and maintenance of trees, without felling for at least 10 years, through recurring incentive payments awarded by the Plan Vivo carbon credits programme. 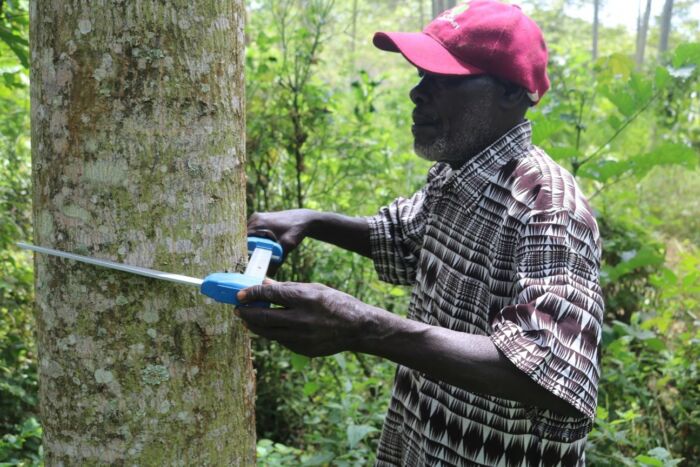 Tobias Bainegula measuring one of his trees using the Breast Height Diameter method.

Tobias joined the project in 2011 by signing a contract to grow agroforestry trees using the methods of dispersed interplanting and boundary planting. Tobias who is now in his 60s mentioned during his interview that he had only wished he had discovered these methods in his youth as he strongly believes by now, he could have become a millionaire through agroforestry. He explains how his neighbours and passers-by are astounded by the bumper crop he has had in these previous years and how they are superstitious of his methods, he happily assures them it is only the result of agroforestry. These neighbours have listened and learned from Tobias and have started planting trees on even the smallest of plots.

Tobias is a proven advocate for the benefits of agroforestry for smallholder farmers food and income security, before planting trees his crops would often be destroyed from strong winds and rains that were becoming more unpredictable with climate change. After planting trees Tobias says this destruction has ended, while the winds and rain remain the trees protect against their onslaught, and he rests easy that his crops and income are safe.

The greatest benefit however is what the trees mean for Tobias’ future, he explained that while he has grown old alongside his trees, he feels more secure than ever with the trees providing a healthy income and pension for him and his family. His ending message in the interview was how he will continue to encourage others to start planting trees now and to think of their future so that when they grow old, they will also have the resources to enjoy life like him.

Whilst Tobias’ story is a common one we heard in many other interviews, there was an exceptional story of how agroforestry helped Claudina Stanford’s family survive tragedy. Claudina lives in a very remote hamlet close to the Ugandan border with her family, she joined the ENB project in 2011 and subsequently planted trees all over her farm. Over the last 10 years she has become infamous within the project for her fast-growing agroforestry trees, which had already reached their expected diameter for 10 years at the 5-year mark. These trees would go on to impress Claudina one last time by providing her family with lifesaving funds which would keep her farm and family intact.

Last year Claudina’s husband was near-fatally attacked with machetes whilst being robbed in his village. He had just taken out a loan against their house to do some building on the land and this money was stolen from him in the attack. With the land on loan and all funds stolen the medical bills following this attack were a very heavy burden on the farming family. Claudina was at risk of her land being repossessed to cover the loan taken out on it, but it was the trees that saved the day. Claudina felled enough trees to cover the cost of the loan and today she is grateful that her husband is alive and well and that the farm is still hers. 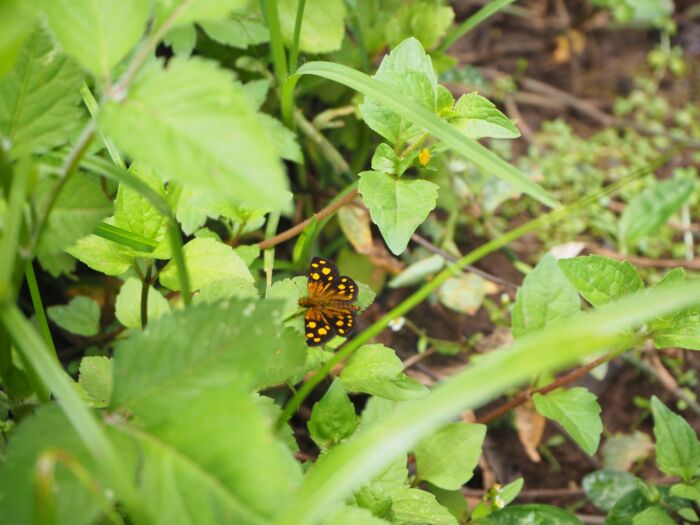 Claudina’s story is an uncommon one, but it greatly demonstrates the insurance agroforestry can provide for smallholder farmers who very often don’t have savings or capital to fall back on when disasters happen. It was a common theme throughout the interviews that the trees would provide an otherwise non-existent pension for the farmers, increasing feelings of stability and lowering anxiety for what the future may bring.

The future was in focus during a lot of the interviews, of note was the bright future for biodiversity and environment in the area, many interviewees talked of an increase of birds and pollinators in their plots, and the soil showing more earthworms than before. Furthermore, every farmer mentioned how their trees provided enough firewood from pruning that they no longer had to take from nearby forests in order to cook or boil waters. The firewood was in such abundance they were also able to supply to their neighbours throughout the years. 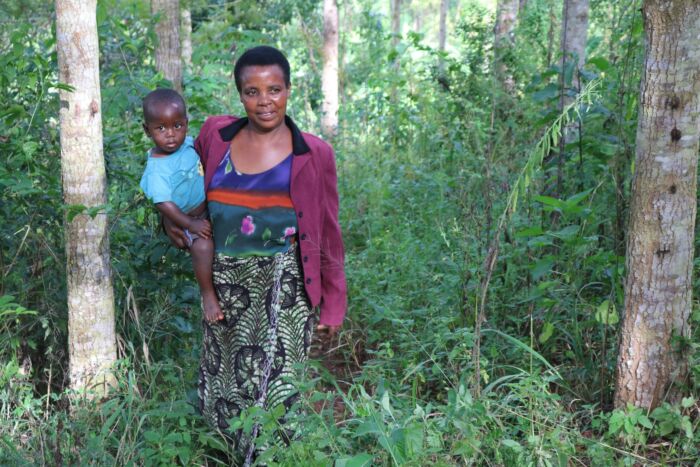 Anajoyce Charles walks through her woodlot with her grandchild, planted 10 years ago she says the woodlot will offer her a retirement fund.

Vi Agroforestry has had the pleasure to work alongside these farmers for the past 10 years and has been overjoyed to hear the benefits reported by farmers in these interviews. In order to better serve these farmers and to work alongside our Theory of Change, Smart Farmers Transformation (SFT), a local farmer-based NGO, took over the implementation role for the project in August 2020. The role for SFT will be to facilitate farmers with extension services while Vi Agroforestry will oversee the quality assurance of the project. Through SFT farmers will be able to get extended services on agroforestry, sustainable land management, business development, human rights-based approach, gender awareness and value addition to agroforestry products.

The ENB Project to date has sequestered 76,759 tCO2 through the planting of 619,848 agroforestry trees. Though recruitment of farmers to join the ENB project ended in June 2019, SFT has managed to facilitate new farmers to plant trees using agroforestry methods and has seen 50,752 more trees planted.

The future is bright for the reduction of carbon in the atmosphere, smallholder farmer livelihoods, and biodiversity in previously over farmed areas. We have a strong belief our vision of a sustainable environment that enables women and men living in poverty to improve their lives is and can be achieved through our continued work with farmer organizations. 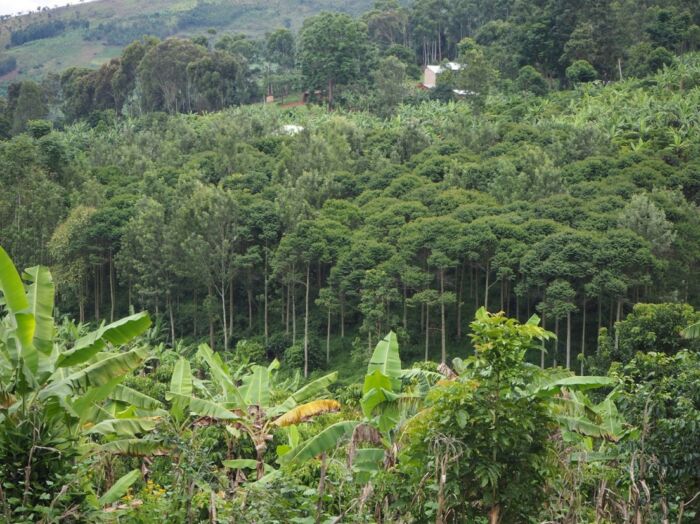 A ENB project plot of a graduating farmer