In a time where a lot is going in the wrong direction, Vi Agroforestry contributes a counter force! Our partner organizations, have once again demonstrated the strength of working together.
Vi Agroforestry collected a total of SEK 55 million in 2021. This has led, among other things, to 6.7 million new trees being planted during the year, and to 46,000 farming families starting to use sustainable farming methods. In our annual report, we summarize the past year.

The year 2021 has been a year of growing climate crisis and a continued strained situation around the world as a result of the corona pandemic. Hunger and poverty have increased in the countries where Vi Agroforestry works. Women and children have been hit hardest.

– In a time where a lot is going in the wrong direction, the Vi Agroforestry contributes a counterforce. Our partner organizations, which consist of people who themselves live in poverty, have time and again shown the strength of working together, says Vi Agroforestry’s general secretary Anna Tibblin and chairman Unn Edberg in the reflection on the year 2021 that begins the annual report.

Of the total SEK 54.9 million Vi Agroforestry collected last year, just over half came from private individuals. This means, to our great joy, that support from private individuals has grown somewhat since the year before. We are extremely grateful for all the support we have received and are receiving – it makes a difference! The picture below gives an example of what the money went to: 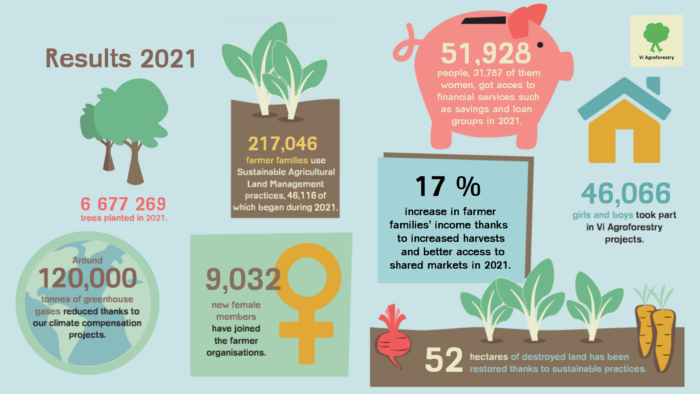 Voices from the region

“No, it’s not magic, it’s agroforestry,” farmer Tobias Bainegula happily explains to all the curious neighbors. The neighbors are, to say the least, amazed at how the trees have meant that other crops that Tobias grows are no longer blown over or washed away by torrential rain. When they now hear him tell and see with their own eyes how the trees secure the harvest, they have also started planting trees. Tobias himself, just over 60 years old, explains that the best thing about the trees is that they will continue to provide him and his family with income even on the day he can no longer work.

“When I joined the project, I learned how to grow vegetables with compost soil and manure. At the edge of the vegetable garden, I plant trees, which helped me increase my harvest. Now my children and I have enough to both eat and sell,” says Yvonne Mukeshimana from the Kayonza district in Rwanda. Yvonne is one of many young girls who became mothers already in their teens and were forced to leave school early. Vi Agroforestry’s local partner gives her and other young people a chance for a more secure livelihood by teaching them sustainable cultivation methods.

Did you know that cows fed nutritious food can produce five times more milk? That six kilos of calliandra leaves a day gives a cow the recommended daily intake of protein? Or that fodder bushes can also prevent soil erosion? In the Shrubs for Change project , 300 selected members of dairy farmer cooperatives learn how to get more milk from their dairy cows by feeding them leaves from, for example, calliandra bushes. The members then pass the knowledge on in their cooperatives, with the goal of reaching over 100,000 people. To help them, they get light-hearted videos where experts and farmers discuss and demonstrate smart ways to grow.

“Before I took courses, I failed to prevent soil erosion. But on the course, they advised me to put strips of wilted material among my crops. It has improved the quality of the soil I farm in,” says Clement Ayuku Emmanuel. Clement has fled to Uganda from South Sudan and today lives in a refugee settlement in Parolinya, in northern Uganda. There, Vi Agroforestry, together with the Red Cross, runs a project for families in the refugee settlement and nearby Ugandan villages, financed by the Postal Code Lottery. The families get access to clean water and toilets, build fuel-efficient stoves, grow their own food and plant trees for fuel and animal feed. Clement has also learned to take care of goats and chickens and now shares his knowledge with others.

Our work in Sweden and globally

Where the pandemic has closed doors, we have opened digital windows. From makeshift home offices on kitchen tables, we have travelled digitally from Sweden to Kenyan farms. We gave politicians the opportunity to form their own opinion about how the pandemic affected female farmers in low-income countries. And we invited the public to come along for two very ordinary days on Kenyan farms . From both Sweden and Tanzania, we and the farmers we work with have made arrangements for a UN summit . Like last year, Vi Agroforestry has focused on demanding all people’s right to food and climate justice.